The bigger problem as we’ve been pointing out for months, is the CPI is hugely understated.

Here’s Why the CPI is Understated:

We’ve covered this topic at length, but it’s worth going through the calculation again.  In 1998, the Bureau of Labor Statistics (BLS) changed the cost of shelter (housing) from actual cost to something called “owners’ equivalent rent”.  Check out the linked article above if you want a more detailed description, but the short version is owners’ equivalent rent hugely understates the increase in housing prices.  The recent CPI showed the cost of shelter (measured by the inaccurate owners’ equivalent rent) up 5.0% while the Case Shiller Home Price Index (which measures actual changes in housing prices) was up 19.2%.  Shelter is 33% of the CPI so if we were simply to measure the CPI the way we did until 1998, we’d have seen a 13.2% inflation number today.

Food and beverages make up 14.3% of the CPI, and the BLS is telling us that food price inflation is just 8.8%.  Yet, when we check the statistics from the Food and Agriculture Organization of the United Nations, we see that their food price index is up 33.6% in the last year.  Americans eat a relatively expensive diet with a lot of fish and meat.  We find it hard to believe that US food prices are up less than one-third of the worldwide increase.  Our guess is that anyone reading this who has been in a supermarket in the last month is seeing price increases of more than 8.8%.

Finally, for those of you who don’t enjoy wading through statistical reports from the government, don’t worry:  we’re happy to do it for you.  The BLS adjusted 72 items in the index.  While the agency doesn’t specify if the adjustments made were to increase or decrease the index, we’d be incredulous if any government organization is making inflation look worse than reality.  In short, we don’t believe the reported number, and believe that real inflation as experienced by the average American is roughly double the official 8.5% CPI.

Side note:  We’re not the only ones seeing this problem.  A blockchain-based Truflation index is showing a CPI of 13.2% with food costs up 26.5%.  This index looks at actual prices and doesn’t allow sneaky adjustments.  Worth noting that the Truflation number is closer to ours than to the official statistics.

The below section is a reprint from something we wrote last month, but it’s still relevant now:

Last month, we looked at what it would look like if we’re wrong about inflation and interest rates.  Some issues like the probability that the price of used cars won’t keep increasing at 40 percent are reasonable.  Others, such as the hope that supply lines will clear are less probable due to conflict with Russia reducing international trade, and China’s continued Covid lockdowns closing ports.  However, we think the strongest argument being made that things will settle to a more familiar version of “normal” later this year is the recursive character of economic inputs.

That’s simply a fancy way of saying that for many things the cure for high prices is high prices.  While no one likes high oil and energy prices, at some level, people drive less, and keep their homes at lower temperatures.  The same higher prices incentivize oil producers to drill more wells.  Higher home prices and higher mortgage rates are already causing a slowdown in the rate of real estate transactions.  If enough of these factors coincide, the Fed could get the soft landing they’re hoping to get and might not have to raise rates as much as we think.

We’ve also seen recent reports that shipping costs are coming down and shipping availability is returning to more normal levels.  In addition, most of last quarter’s GDP growth was inventory restocking.  If retailers over-ordered out of fear of coming inflation and backed-up supply lines, we could be looking at a deflationary over-stocking situation.  One way or another, we’re going to see demand destruction, either through inflationary pricing, or through higher rates from the Fed.

Here’s Why We Think Inflation is Not Transitory:

We’ve covered this topic in depth in another post (available here).  In it, we note that a lack of planting by huge grain exporter, Ukraine, combined with Russian refusal to ship the US fertilizer is going to reduce the food supply in a few months.  Expect coming food shortages and greater levels of food inflation.  We also wrote about how we’re seeing the reversal of cost-effective but fragile multi-national supply lines being restructured.  While we think it’s a good idea to not depend on China for our pharmaceuticals and computer chips, it’s going to cost more to produce in the US.

Ultimately, the key reason we’re seeing inflation is years of too-low interest rates combined with excessive spending and money printing.  80% of all dollars in existence have been printed in the last two years.  The current plans we’re seeing from the financially illiterate in Washington DC involve subsidizing people’s expenses through more deficit spending financed through more money-printing.  More of the same policies that got us here won’t fix the problem.  Printing more money to pay people’s expenses will lead to continued increases in those expenses through inflation.  (For the record, this is not a partisan complaint.  We think both political parties are guilty of over-spending and of trying to politicize Federal Reserve policies.)  This is why we own Bitcoin ($BTC). 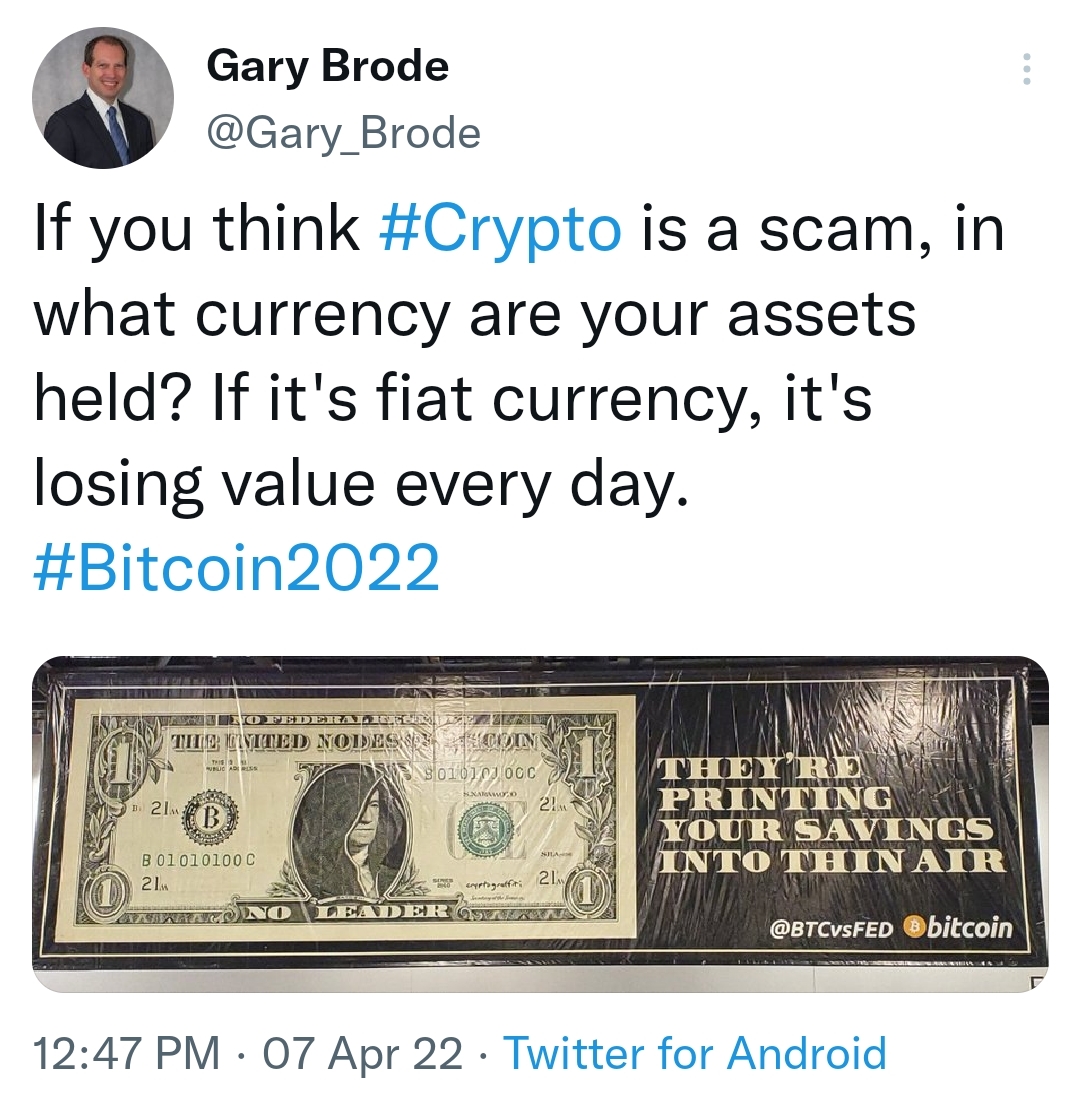 We’ve also seen a plan to allow the use of 15% ethanol gasoline in an attempt to lower fuel prices.  Besides the fact that high ethanol gas is bad for engines, we think it’s dangerous to start using corn to subsidize the fuel market ahead of coming grain shortages.

If inflation were “just” 8.5% it would be enough to destroy the value of your savings in just a few years.  It would crush the real estate market.  It would force the Federal Reserve to raise rates hundreds of basis points and kill economic growth.  Even now, during a time of massive labor demand, workers’ wage increases aren’t keeping up with inflation.  They’re getting paid more, but can afford less.

The last time the Fed faced inflation numbers this high was 40 years ago when the national debt was a fraction of the current number.  With over 30 trillion in on-balance sheet debt, the US can’t raise rates too much before the entire budget gets spent on interest.  We’ll have future pieces on what’s happening in the real estate market, and our view of the currency markets.  In the meantime, we continue to maintain a large inflation hedge in our portfolio which is available to subscribers here.