Last year, a message board on Reddit called Wall Street Bets succeeded in driving up the prices of GameStop (ticker: GME) and AMC Entertainment (ticker: AMC) by huge amounts. The efforts caused billions of dollars of losses at hedge fund, Melvin Capital, enabled some large insider sales, and resulted in the bizarre occurrence of a movie theater company doing a secondary offering and buying an interest in a gold and silver mine.  The Wall Street Bets crowd caused chaos, hilarity (depending on your point of view), and gave every hedge fund with short positions something new to worry about when taking a position.

We weren’t involved, and much of the excitement has since subsided.  It’s worth taking a look at the meme stock fad and why we stayed out of it.  At its core, we think it’s similar to the periodic penny stock crazes, and lately we’ve been getting questions about those.  Let’s address the whole issue together.

Many readers know I spent the last month in Peru.  One weekend in Mancora, I was by the pool with some new friends from Lima.  They invited me to join them for beach volleyball, and I paused.  In general, South Americans from beach towns like Lima spend a lot more time playing beach volleyball than people like me who spent their formative years in Michigan and New York City.  I imagined everyone being irritated at me for ruining the game with my terrible play.  Despite my fears, that didn’t happen.

It turns out I had two advantages.  As a former competitive marathoner, I’m accustomed to high-effort sports.  I was willing to make up for a lack of skill by playing hard.  More importantly, when I learned to play volleyball in high school, we were taught to serve overhand.  Compared to my teammates underhand serve, mine came in much faster and at a more challenging angle.  By the second day, people wanted me on their team because “la service gringo” (as they called it) was creating problems for the other team.

The following week, I was invited to join 7 Peruvians for lunch.  Because I studied other languages instead of Spanish, I had difficulty following the conversation.  That’s not a big problem, but I found the behavior of half the table to be strange.  Many of the people there wouldn’t greet me or introduce themselves.  When I tried to do so, they avoided making eye contact so they didn’t have to speak with me.  In general, I’ve found the Peruvian people to be warm and friendly so didn’t understand what was happening.  Had I done something wrong?

I asked a friend about this experience, and he quickly explained that my lunch companions were afraid to talk to me because they spoke English poorly and were worried that I’d judge them.  It would have never occurred to me to do that.  And even in my broken Spanish, I have enough knowledge to greet people, introduce myself, and ask their names.

People (including me) have a tendency to make up stories.  We’re all certain of what other people think of us, and how they’ll react to something we do.  This is normal behavior, but we should acknowledge that we’re frequently wrong.  We’ve seen this exact scenario play out with stock investments as well.  Frequently, people get emotionally attached to a position and miss the signals that indicate whether their investment thesis is right or wrong.

“Market Strategists” speculate every time the market falls that we’ve hit the bottom.  The truth is they have no idea.  Others constantly call the top and advertise the one time they were right.  A few months ago, the Federal Reserve was saying that inflation would be transitory and we correctly noted that there was no way they could know that.  With the meme stock craze, people didn’t even bother with the investment thesis and just started thinking the market would make them rich just for showing up.

Investing vs Speculating vs Gambling:

When investing, we have a clear understanding of the underlying business we’re buying.  We’ve looked at company and industry trends and have a clear idea of what we think will happen to revenue growth and operating margins.  Typically, we’re looking at earnings or free cash flow (or a reasonable proxy for them) a few years out and have an idea of what we’d pay for that.  We invest based on detailed analysis, and constantly compare real-world events to our investment thesis.  That’s how we know when a stock goes against us whether we should sell or buy more.

Speculators have a short-term view of supply and demand conditions.  Most recently, oil and grain speculators bought those commodities due to disruptions in the market caused by the Russian invasion of Ukraine.  The speculators are not figuring out the value of a gallon of gasoline to get someone to work, or the value of an employee’s time if they take the bus instead of driving.  However, speculators do understand that even temporary disruptions can create volatility that can be profitable.

Gambling is buying a stock without understanding the underlying business with the hope that someone else will pay more for it later.  The initial meme stock creators/buyers correctly figured out that low-priced stocks with high short interest were vulnerable to a coordinated buying effort causing a short squeeze.  Technically, this kind of coordination is considered illegal stock manipulation, but the Wall Street Bets crowd either didn’t consider this, or realized that it was going to be a challenge for the SEC to prosecute the entire Reddit message board.

Thousands of people followed in with the rallying cries of “hold the line” meaning don’t sell and “to the moon” indicating they expected unlimited profits.  While the initial speculative thesis was correct that a coordinated short squeeze could make a stock go up, the retail investors who piled in had no way of evaluating if they were right or wrong.  They had no set conditions for when they’d sell, or if they should buy more on a price decline.  There were no fundamentals and no analysis; just a casino where people bought stock, crossed their fingers, and waited to get rich. 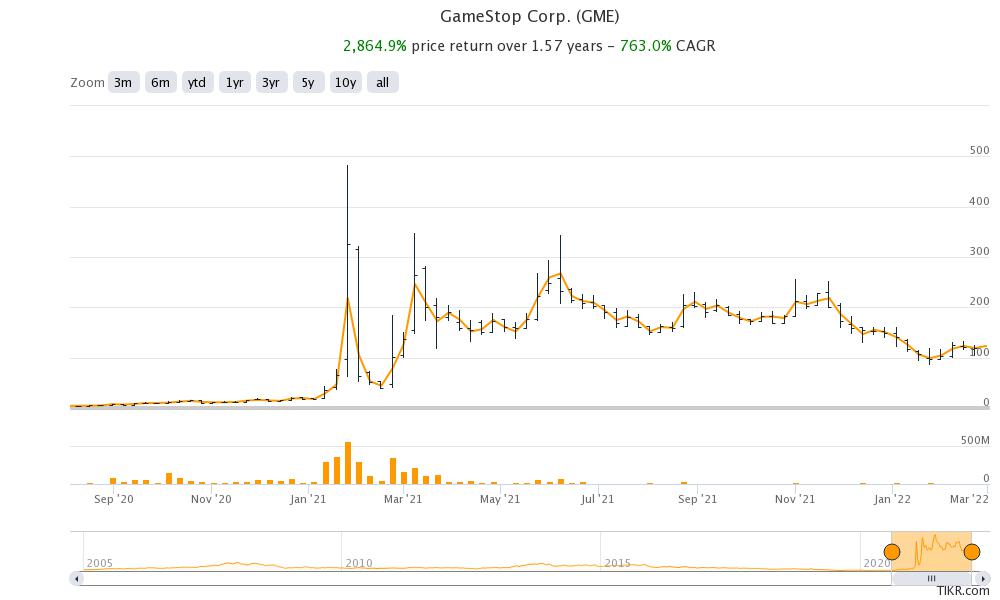 As the stock quickly rose from around $4 to past $400, how many of these retail buyers sold and locked in huge profits?  More importantly, how many bought stock at $200, $300, or above $400 and took huge losses.  People who walk into a casino understand that they’re risking total loss of everything in their pocket.  People who “invested” in meme stocks thought they were going to make money, and as a result, risked more capital in their Robin Hood accounts than they would have walking into a casino.  Some put their entire 401K and retirement plans on the line.

What the Other “Guy” is Going to Do and How This Works:

Years ago, I had a meeting with someone who claimed to have made a lot of money trading penny stocks.  Penny stock are low-priced stocks (typically under a dollar) that tend to be highly volatile.  They are also common targets for stock manipulators because getting a relatively illiquid stock to move just a few cents can lead to large percentage returns.

This individual pitched a penny stock he liked, but instead of talking about how the company had a new product, or a new contract, or something that was going to improve the value of the corporation, he told me that he knew a group of investors loosely connected to management who were going to be buying more stock.  According to him, once the current selling pressure subsided, these people were going to start buying.

This “investment thesis” contained two problems.  First, depending on the details, this kind of activity and coordination is either illegal, or close enough to it that an unpleasant examination from the SEC was a real possibility.  We don’t engage in that kind of activity – ever.  Second, even if the specifics of this particular case passed SEC regulations, there were no fundamentals to evaluate.  The story basically came down to the idea that we should buy the stock now because other people would buy more stock after we did.  Seeing an imbalance of supply and demand in the market is one thing.  Buying a stock and waiting for others to come in right after you and buy more at a higher price is fingers-crossed gambling.

The meme stocks had this problem.  Retail “investors” weren’t buying GameStop because they had analyzed the company.  They certainly weren’t concerned about the fact that supply chain limitations were reducing hardware availability, and digital direct-to-consumer sales were killing the software business.  They plan was basically to join the “madness of crowds” and wait to get rich.

This Was the End Result (to Date):

Melvin Capital lost billions.  Citadel (a multi-strategy manager) invested more money in Melvin Capital and then reduced their investment.  Some Wall Street Bets participants made a ton of money as GME went from $4 to $400.  And more Wall Street Bets participants lost a fortune as the stock dropped over 80% from its high.  Finally, Citadel made millions buying the order flow from Robin Hood and ensuring “free” customers got poor trade execution.  The most accurate one sentence summary is that a lot of individual investors lost money while proving they could cost a big hedge fund even more money.

The case studies for the meme stocks are even stranger.  GameStop insiders sold a huge amount of stock at inflated prices, and the company did a secondary offering.  Currently, it’s talking about entering non-gaming businesses like NFTs (non-fungible tokens).  AMC Entertainment also did a secondary offering and used some of the proceeds to buy an interest in a gold and silver mine.  In other words, both companies sold stock at meme-inflated prices.  Both companies entered new non-core businesses (because they had limited confidence in their current businesses).  And no one had NFT and gold mine as part of their original investment thesis.  This is gambling.  Weird, funny, and possibly fun, but still gambling.

How We Think About These Kinds of “Opportunities”:

Our view is that situations where we’re counting on other people to come in at the right time and buy stock at higher prices than we have are very low-quality situations.  We focus on stock fundamentals and data.  Our advice for people trying to figure out the investment landscape:

We’re not going to get involved in this space and prefer to avoid situations where detailed analysis isn’t possible.  If you’re serious about wanting to earn great returns over the long-run, subscribe to Deep Knowledge Investing and we will be there to help.  And if you’re looking for something that’s different from what Deep Knowledge Investing offers, we have an incredible Board of Advisors and plenty of great contacts for smart investors and original thinkers.  We’re always happy to guide our subscribers to a better direction.

The information we provide is publicly available; our reports are neither an offer nor a solicitation to buy or sell securities. All expressions of opinion are precisely that and are subject to change. DKI, affiliates of DKI or its principal or others associated with DKI may have, take or sell positions in securities of companies about which we write.