Overview:
On February 24, 2020, we published Net Short explaining that we had gone short against the market due to concerns about the coronavirus. Over the next 3 weeks, we wrote 3 additional pieces (here, here, and here) reiterating and amplifying our bearish position. During that period, the market fell 29%. More recently, we have focused on finding on finding stocks that are trading like there are long-term business problems, but where we see a high probability of improving fundamentals.

In HCA Healthcare, Inc. (ticker: HCA), we see a stock that has been hit by Covid-19 concerns, and which is in a good position to have improving fundamental performance regardless of what happens with the virus.

Business Overview:
HCA operates 186 hospitals and approximately 2,000 sites of care, including surgery centers, freestanding emergency rooms, urgent care centers, and physician clinics in 21 states and the United Kingdom[1]. Almost half of those hospitals are in Florida and Texas which accounts for almost 50% of revenue[2].

In general, the hospital business has been a good one. From 2011 to 2019, EBITDA margins ranged from 18.8% to 20% and EBIT margins ranged from 14.0% to 15.5%. The one issue that has been a consistent negative trend is charity care which has increased from 27.4% of adjusted revenue in 2011 to 37.9% last year. HCA has been able to absorb that additional cost for two reasons. First, the variable cost of treating an incremental patient isn’t as high as the fixed cost of building and running the facility. Second, hospitals have been able to get consistent price increases from their insured patients. Essentially, the hospitals are taking on the additional volume of the “charity care” and charging the insured patients for that care. It’s a quirk of the business that pricing for the same service can vary widely depending on who is paying the bill.

Recent adjusted EPS growth has been in the mid/high teens and 2020 guidance given prior to the Covid-19 pandemic hitting the US was for EPS of $11.30 to $12.10/share[3]. $12 in earnings would have represented a 14% increase over the $10.50 earned in 2019. At that time, we would have figured that $12 in earnings growing in the mid/high teens in a good business should trade around 15x earnings for a $180 price target. This chart from financial data site TIKR.com shows that HCA often would trade at/around that level: 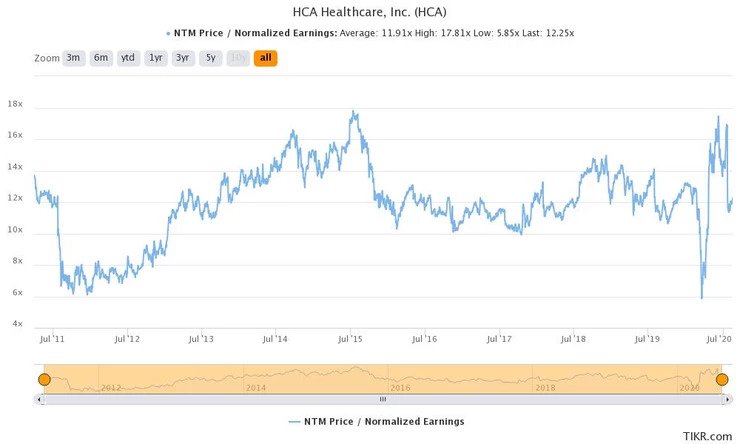 The elective surgeries that were postponed are high-margin procedures, and there were legitimate concerns that the hospitals were going to suffer terrible financial performance. HCA withdrew its earnings guidance for the year. These are the kind of events that can make a stock fall.

The Government Sends A Lot of Funds:
In the second quarter, the US Government sent HCA $4.4 billion which represented 6 months of prepaid Medicaid expenses. The funds don’t need to be repaid; but rather, are an advance on future procedures. HCA took in the cash and recognized a large corresponding liability on the deferred revenue line. These funds were intended to ensure that the hospitals didn’t fail while they were focused almost exclusively on treating Covid-19 patients.

In addition, HCA received another $1.4 billion in the second quarter in grants as part of the stimulus package. These funds also don’t need to be repaid; but rather, are an advance for treating future Covid-19 patients. Much of the money went to hospitals in Covid-19 hotspots which was helpful given HCA’s outsized exposure in Florida and Texas.

During the second quarter, HCA recognized $822 million of these stimulus funds as revenue. That amounts to $590MM net of tax or $1.73 in EPS. Wall Street analysts had expected HCA to earn -$.39 per share in the quarter. Instead, largely aided by the $1.73/share in government funds, HCA earned $3.23. That was 46% more than the $2.21 earned in the second quarter of 2019. Previously, the stock fell due to concerns about lack of earnings during the pandemic, but earnings actually rose. Once this information was available, Deep Knowledge Investing bought HCA stock under $116 on July 22nd.

As noted above, government stimulus funds in the second quarter were $1.4 billion, and the company recognized just over $800 million leaving a balance of $600 million. In early July, HCA received an additional $300 million in stimulus funds to treat future Covid-19 patients making that balance $900 million or approximately $1.89 a share after taxes. Earnings estimates for the quarter currently sit at $2.46, only slightly above what the company can recognize for treating pandemic patients.

Heads I Win – Tails I Win:
This brings us to the current asymmetrical payoff for HCA. While the stock has risen from our $115 purchase price to the current $134, there is still an opportunity with what we believe to be very little downside. Long-term, there has to be a return to normalcy in the hospital business. While restaurants may go out of business because people choose to eat at home, and technically, no one needs to get on a cruise ship (although people are lining up to do just that), we can’t have our high-end medical infrastructure be all-Covid all the time. There is already a significant backlog of people who haven’t had other medical problems tended to because they were afraid to enter a hospital where there were contagious virus patients. Some of those people who need to get a hip or knee replaced can go on for a while with discomfort. Others who have heart problems or cancer need to get in for treatment.

If it takes a year or so to get back to normal, we’re looking at earnings that resemble the prior guidance of around $12 a share getting us to a $180 target which is 35% above the current price. And if it takes a couple of quarters to normalize the business, HCA has almost $900 million on the balance sheet that it can recognize for treating Covid-19 patients and the previously mentioned $4.4 billion in advances that it can start to recognize for treating Medicaid patients. The company beat both low expectations and prior year’s earnings in the second quarter. That seems likely to happen again this quarter.

What’s the Risk:
Long-term, we do see one potential negative outcome for the hospitals from the pandemic. The government-mandated shutdowns have forced tens of millions of Americans into unemployment. We could start to see people losing employment-related health insurance. Those people will likely make use of COBRA coverage for a while. In a worst case scenario, they’d move to the health insurance exchanges where low income people are heavily subsidized. Those plans tend to pay the hospitals around 80% of what employer-based insurance pays.

Last year, HCA’s managed care business accounted for almost $27 billion in revenue. Assuming 5% of that business moves to the exchanges, it would hit earnings by about $.56/share which would affect our valuation target by a little over $8. Not great, but not a disaster either. We note that the 5% estimate assumes we have some sort of economic normalization and people get back to work. In a worse economic situation, the earnings hit could be higher.

Conclusion:
While the stock has risen recently from its lows, we see HCA as a low-risk opportunity with multiple ways to win. If the virus remains a significant problem, the company has billions in cash it can recognize as earnings. We believe that longer-term, the medical industry has to go back to treating non-Covid-19 medical issues, and in that likely scenario, the company is cheap compared to normalized earnings.