Skip to content
Questioning the “Bonds are Cheap” Narrative in Pictures

We’ve noted in the past that many market participants are eagerly waiting for the “Fed pivot”; the time when they expect the Federal Reserve will reassure investors that it’s done raising rates and can get back to more of the fun zero-interest rate combined with trillions of dollars of quantitative easing.  Of course that plan has blown up a huge asset bubble over the past dozen years (or so).  Part of the chant for the Fed to ease up is coming from bond investors who are claiming that bonds are now cheap.

While DKI tends to focus on stocks, the bond market is huge and important, and a breakdown in the UK bond market (gilts) is what led the Bank of England to combine its current fiscal tightening and quantitative tightening (QT) with 30-year bond purchases (quantitative easing).  New slogan, “The Bank of England:  We pursue all policies at the same time”.  The short version of what happened is central banks pushed interest rates to zero (or below) which causes bond prices to rise and bond yields to fall.  With long-term bond yields around 1% (depending on the government and maturity), pension funds couldn’t get the yield they needed to pay for promised pensions.  Many European (and we believe some American) pension funds engaged in swaps trades which amounts to a leveraged bet on low interest rates.  As long as interest rates remained low, the funds would earn necessary excess returns.  That was great until rates went up which caused capital calls and exposed the funds’ poor management and huge losses.  We don’t know if this was a case of “let’s get through this year and we’ll deal with the problem later”, or if people managing pension funds really thought that interest rates would always be zero.

We’re seeing two arguments for a more accommodative Fed.  The “pivot” crowd tends to be equity (stock) investors.  They’re saying that the Fed is tightening into a recession and should stop.  It’s definitely true that the Fed is tightening into a recession, but based on recent comments from Fed Chairman, Jerome Powell, and a few other Governors, they understand that inflation is starting to take hold and that letting it run can turn into a disaster.  Many of these “pivot” people profess concern for the people who will lose their jobs in the coming rise in unemployment.  However, we note that unemployment is still low, there are millions of available jobs, and inflation is crushing the living standards of people without the means to invest in stocks.  We also add that real interest rates are still negative, inflation is still in the mid teens (accounting for actual housing cost), and the Fed balance sheet is still $9 trillion.

The second argument comes from the “bonds are cheap” crowd.  These people think bonds are inexpensive because they’re down a lot this year.  In fairness, the $TLT (ETF for the 20-year Treasury Bond) is down 29% so far this year.  Our response is that bonds are much cheaper than they were last year, but that doesn’t necessarily mean that they’re cheap now.  It could also mean that bonds were expensive last year.

Why Bonds Aren’t Cheap – In Pictures: 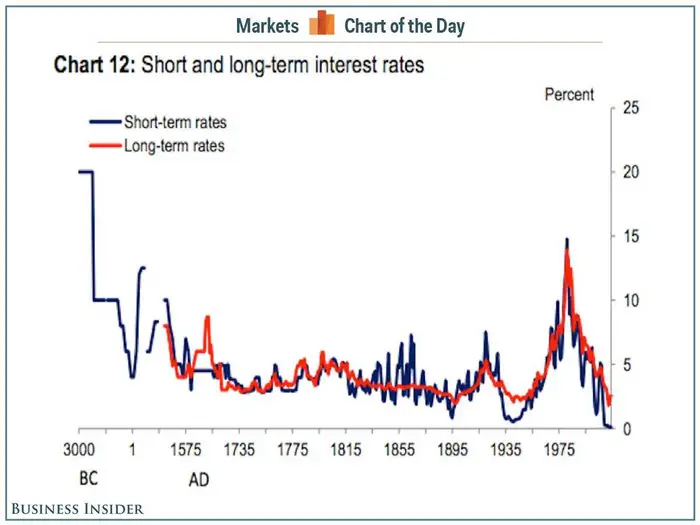 The above graph comes to us from Business Insider (link here) and contains about 5,000 years of interest rate data from dozens of historical sources.  The chart is a few years old, so at the end, where it shows short-term rates at zero, that would now be 3%.  The 10-year treasury is currently at 3.6% so you’d have to add a small tick up to the red line at the end of the chart.  Still, it’s pretty easy to see that on any historical basis, current interest rates (while not zero) are still VERY low.  This chart encapsulates why we suggest that bonds aren’t “cheap” right now; but rather, were super-expensive last year. 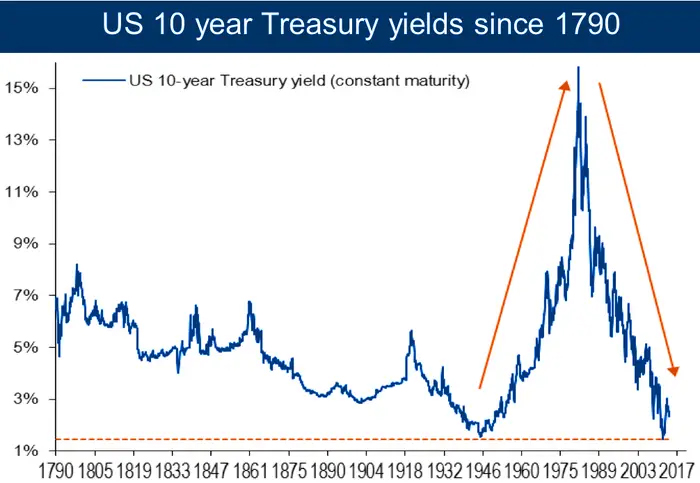 This is a 230 year chart showing the US 10 year Treasury yield.  Again, it’s at 3.6% right now, so include a little mark up at the end.  Long-term, that rate tends to stay in the 4% – 6% range with a few spikes and a couple of dips.  Still looks like bonds aren’t cheap – especially given headline inflation above 8% and real inflation in the mid-teens.  Chart also from Business Insider (link here).

I downloaded this from the website of the St. Louis Fed today.  Surprisingly, their site isn’t fully updated, so you can include a small tick up at the end showing the fed funds rate currently just above 3%.  That’s very low by historical standards.  People may have forgotten that the mostly-zero interest rates we’ve had since 2009 are not the norm, and shouldn’t be the norm.  When interest rates are zero, it blows up asset bubbles, encourages insane risk-taking, and kills the ability of any pension fund to prepare for the long-term liability of paying out a reasonable rate of return to people who have retired.

The three prior graphs have all shown that current interest rates are far below historical norms, but don’t prove right or wrong in the debate between the “bonds are cheap, reduce rates” crowd and the “inflation is huge, raise rates” crowd.  We think this last graph settles the discussion.  (As always, no discuss is ever “settled” so if you’re reading this and want to argue that bonds are currently cheap, please reach out at IR@DeepKnowledgeInvesting.com and we’ll publish any thoughtful answers.)  This last graph (also from the St. Louis Fed) shows the parabolic increase in the money supply first when the US went off the gold standard in the early 1970s, increasing as the Fed. got long-term aggressive after the 2008 financial crisis, and straight up with Covid-spending.  The current Administration has successfully pressured Congress to approve trillions more of additional spending (to reduce inflation?!) while insisting in public that Covid is over.

That kind of increase in the money supply combined with supply-crushing lockdowns led to more money chasing fewer goods which is the recipe for inflation.  The best tool the Fed has to fight inflation is increasing interest rates.  Bonds are not only cheap compared with historical prices, they are INSANELY cheap considering the current situation of low rates and very high inflation.

We thought the graphs would help, but this is still a complicated topic.  Reach out at IR@DeepKnowledgeInvesting.com with any questions.  If you want to know how I’m position my portfolio to deal with the issue, you can subscribe to DKI here.

2 thoughts on “Questioning the “Bonds are Cheap” Narrative in Pictures”