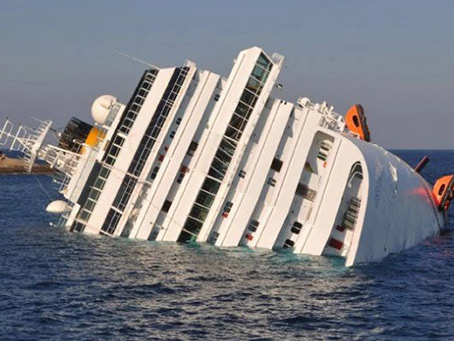 On November 1st, 2019, Princess Cruises, which is owned by Carnival Corporation & Plc (ticker: CCL) announced a 55th anniversary sale which included onboard spending money, room upgrades, a wine & dine package, and airfare credits for specific sailings. There’s nothing unusual about this. Like all leisure, gaming, and hotel companies, cruise lines regularly introduce temporary inducements for passengers to sail on their line. Here’s what made this sale potentially different: A MarketWatch headline that day was titled, “Princess Cruises Announces End of Year Sale Offering Savings of 40 Percent

This was concerning for two reasons. First, while sales are common, it’s unusual to see a press release announcing one. You’d typically see a sale price in a mailer from the cruise company, or advertised on a site like iCruise.com. Second, the MarketWatch headline implied that Carnival was cutting pricing by 40%. As noted in our previous piece in Barron’s (https://lnkd.in/eaqFA5x), investors have been concerned about additions to cruise line capacity potentially leading to reductions in pricing.

While we don’t know why this sale was announced in the financial press instead of solely through more traditional travel channels, we have determined that the MarketWatch headline, while technically correct, was misleading. Here’s what we found:

Only Limited Inventory Was On Sale:
The sale is for a limited number of cabins on certain ships. Carnival owns 104 ships. Of those, 17 are part of the Princess line. Some of those cabins on some of those ships for some dates were on sale. To get the sale price, bookings had to be completed by December 10th, 2019 for sailings between February 2020 and May 2020 for cabins on ships that had the promotional pricing. This wasn’t an across-the-board price reduction.

This Wasn’t Really a 40% Off Sale:
For the cabins that were on sale, the price reduction was up to 40%, and even then, that’s a bit misleading. We’ve spoken with travel agents who have reported that the sale prices were “good not great”. Their interpretation of that is Carnival raised prices, then applied a 40% discount to the higher price in order to announce bigger savings. Retail stores do this all the time so it shouldn’t be a surprise when leisure companies do the same thing.

The Sale Comes with Significant Restrictions:
Booking one of the sale cabins on an upcoming Princess cruise means you give up the right to any refunds and date changes. Our travel agent contacts reported other restrictions as well. This is common in the airline industry where in order to get the best discount prices, you need to accept significant restrictions. If you want some flexibility to cancel or change itineraries, you have to pay the higher price.

Royal Caribbean and Norwegian Cruise Line Holdings Have Held Firm:
Royal Caribbean (ticker: RCL) and Norwegian Cruise Line Holdings (ticker: NCLH) recently announced record bookings at record pricing. Royal Caribbean in particular specified that pricing for each of the four quarters of 2020 were at record levels with booked load factors ahead of last year in all four quarters. They also noted that the booking window has extended as people plan cruises even further in advance.

Conclusion:
All leisure, vacation, and cruise companies will run sales at times, and there’s nothing unusual about the recently announced Princess Cruises sale. All indications from both Royal Caribbean and Norwegian are that both bookings and pricing are at record levels.